Baseball Corridor of Fame debate: Jeff Kent – one of the best power-hitting 2B ever – on the skin wanting in

Waitress saves boy from his abusive mother and father by passing him a word asking ‘ do you want assist?’

Wild about each other! Baby lion and chimpanzee are best of friends and love a good-natured grapple

By Clare Mccarthy For Mailonline

A baby lion and chimpanzee who were born in the same park have been firm friends since birth and love to play and wrestle with each other.

Binta, a six-month-old lion cub, and Limbani, a three-year-old chimp were both born and raised in the Zoological Wildlife Foundation in Miami, Florida.

An adorable video shows the unlikely friendship between the pair as they play and wrestle together in the grass.

The clip shows the lion cub and the chimp cuddling in the grass until it takes a competitive turn.

Binta the lion cub playfully nips at Limbani’s ear who then rolls on top of Bitna and pins her down.

The pair wrestle good-naturedly in the grass, rolling over and grabbing and pushing against each other with their paws and feet.

Matthew Dillon, the foundation’s Communications Director, said: ‘Our goal is to educate the public about the danger these animals face in the wild and what can be done to help protect them. 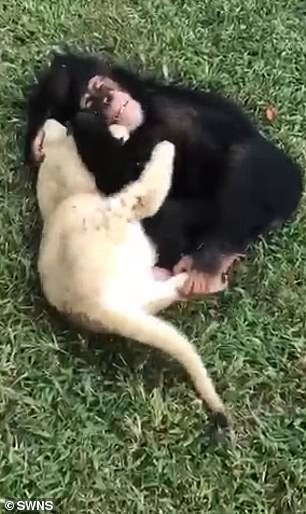 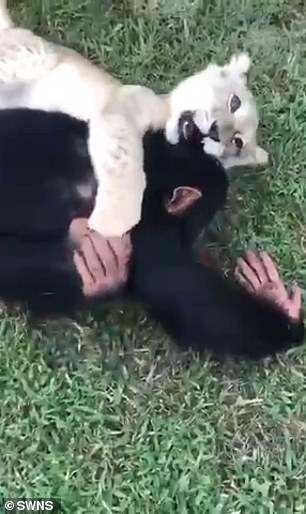 An adorable video captures Binta and Limbani, a six-month-old lion cub and a three-year-old chimp, play fighting and rolling around in the grass. The pair have been best friends since birth and were raised together at a wildlife park in Miami, Florida

‘Binta has known Limbani since birth and clearly they’ve adapted a play style that suits them both.’

The Zoological Wildlife Foundation is a five acre park that offers guided wildlife tours and hands-on encounters with a variety of animals.

Limbani the clever chimpanzee’s other hobbies include painting, learning to tie shoelaces and answering the phone.

For lion cubs like Binta, playing helps cubs develop and grow and social play like roughhousing is important for bonding.

Chimpanzees tend to live longer in captivity than in the wild, with median lifespans of 31.7 years for males. The lifespan of a lion in captivity is about 20 years.