How An Australian Entrepreneur Turned A Homeless Man’s Life Around, Now Raking In Six Figures

A Canadian man who now pockets a six-figure salary just months after living rough on the streets has credited an Australian entrepreneur for his chance at success.

Logan Lapierre, 25, is on track to make a small fortune, but the budding wordsmith had to reach rock bottom before he realised he had to change.

He had been hooked in a cycle of drugs and despair, using LSD and cocaine to keep his demons at bay as he faced sleeping on the streets. 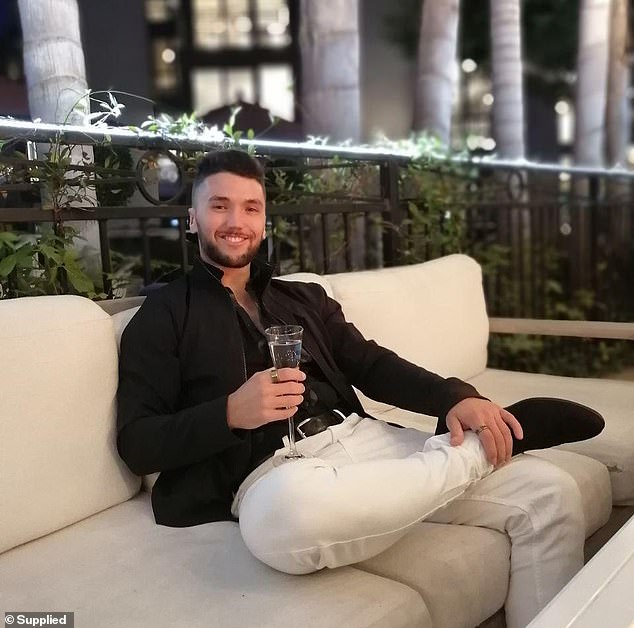 Logan Lapierre (pictured), 25, was inspired to launch his own copy writing business after hitting rock bottom and now earns $14,000 CAD a month

He heard about Australian-born Sean Ferres’s marketing course for copywriters and had decided to spend the little cash he had on a private seminar to ensure he had the best chance at making it big.

But his new-found success is a sharp contrast to his life two years ago.

In 2018, the then 23-year-old was working six days a week as a fitness coach in Ottawa when the stresses of life became difficult to manage and he found himself using drugs to cope.

The downwards spiral took a massive toll on his relationships and, desperate to turn his life around, he moved to Alberta in December to make a fresh start.

But his familiar habits began to creep back when he started a new job that triggered similar stresses as the ones he faced in his previous role. 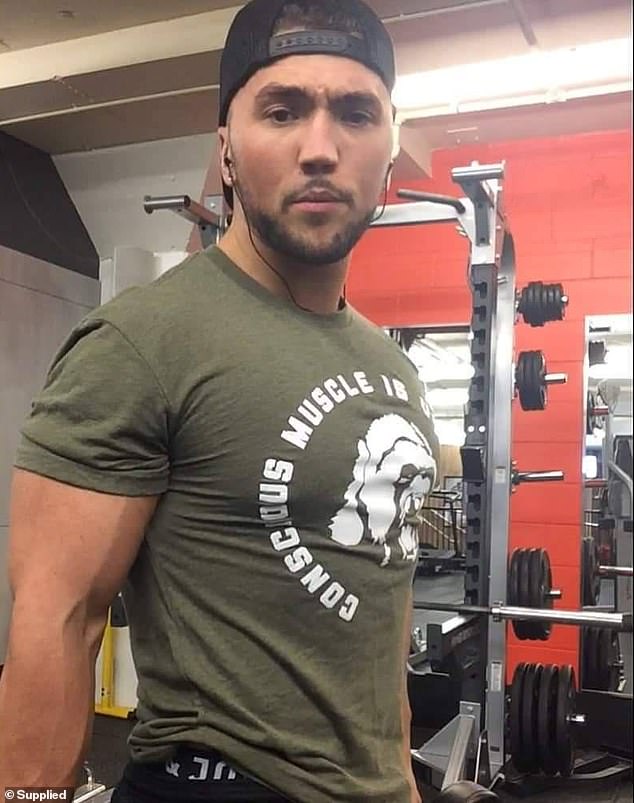 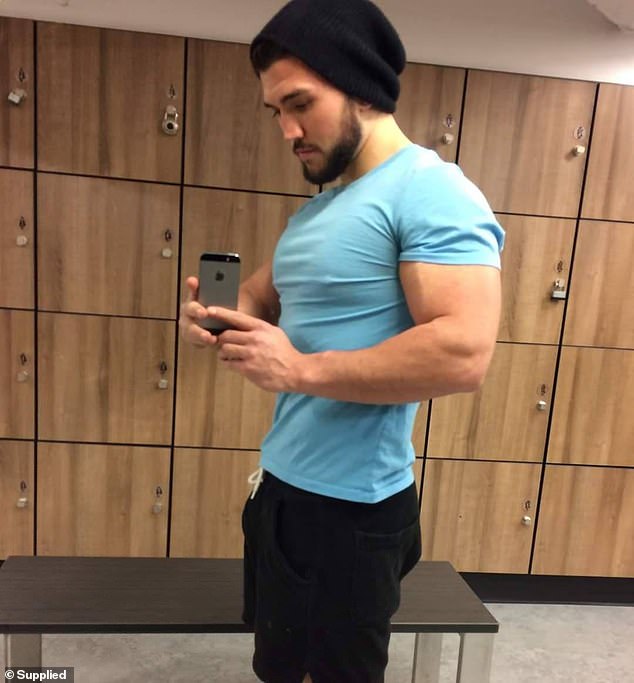 Desperate to turn his life around, he moved to Alberta but soon found himself continuing his old habits. Pictured: Mr Lapierre in 2018

‘I had stopped using drugs for a couple of months and then it all caught up with me.

‘The money I made from work I was using on drugs. That is when I decided to begin throwing all of my money towards courses because I knew that if I was going to change my life, I could not go back to working for an employer. ‘

After leaving his position in July 2019, the aspiring entrepreneur started picking up odd contract jobs to scrape by while researching a plan to build his own business, leading to bouts of homelessness as he struggled to make ends meet.

From July until January he moved frequently between Airbnbs and friend’s couches, even sleeping in a friend’s car for three days in December while waiting for PayPal payments to come through.

But his lowest point came when he was kicked out of his grandmother’s home in January this year where he had been sleeping on a foldable bed in the basement. 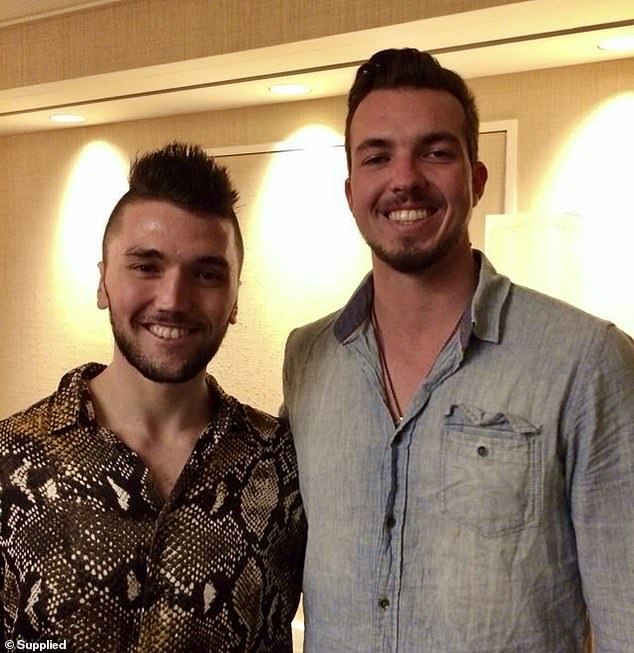 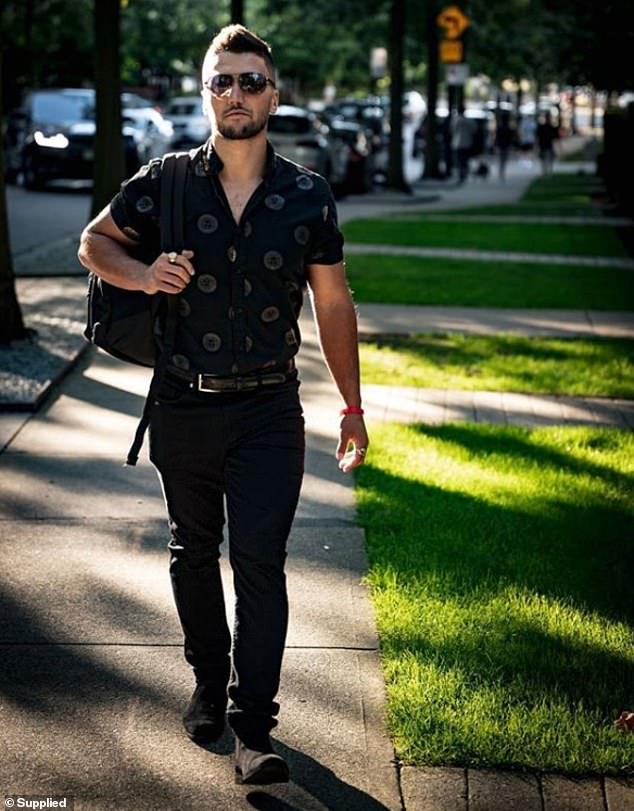 Mr Lapierre found himself homeless twice after vowing to never return to working for an employer, as the stress triggered his drug use

At the time, he was going through an interactive high-income skills training program from Sean who he heard about online, which made him determined to push through and use his skills to get out of the mess.

With nowhere to sleep and $50 to his name, he used his dad’s 24/7 gym pass to enter a fitness centre  then began using the free Wi-Fi to send out 50 direct messages to people he believed could be potential clients.

He stayed awake for 60 hours straight, moving between coffee shops to send messages, until he eventually received 12 replies.

The next day, Mr Lapierre moved in with a friend and was able to secure his first client which allowed him to take the money and buy a one-way plane ticket to California where he attended Mr Ferre’s private client acquisition seminar.

‘Now I work with some of the biggest names in the fitness industry and make six figures a year,’ he said. 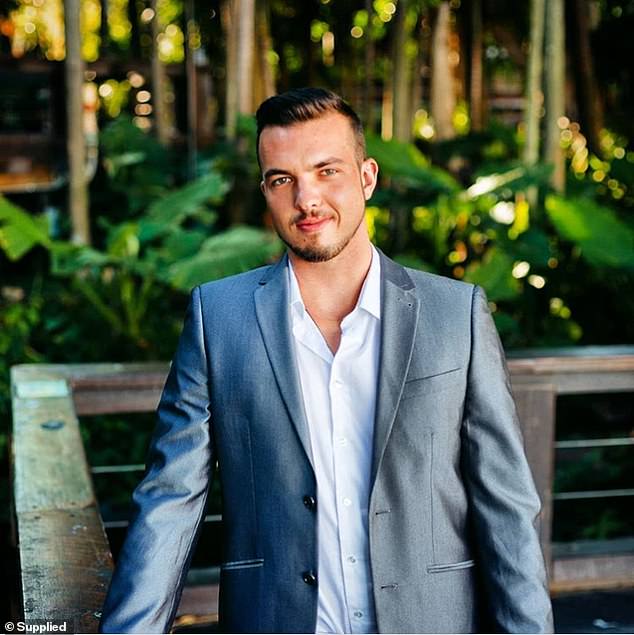 Once he had made a sale, the aspiring entrepreneur booked a flight to California to attend Australian entrepreneur Sean Ferres’ (pictured) copywriting marketing course 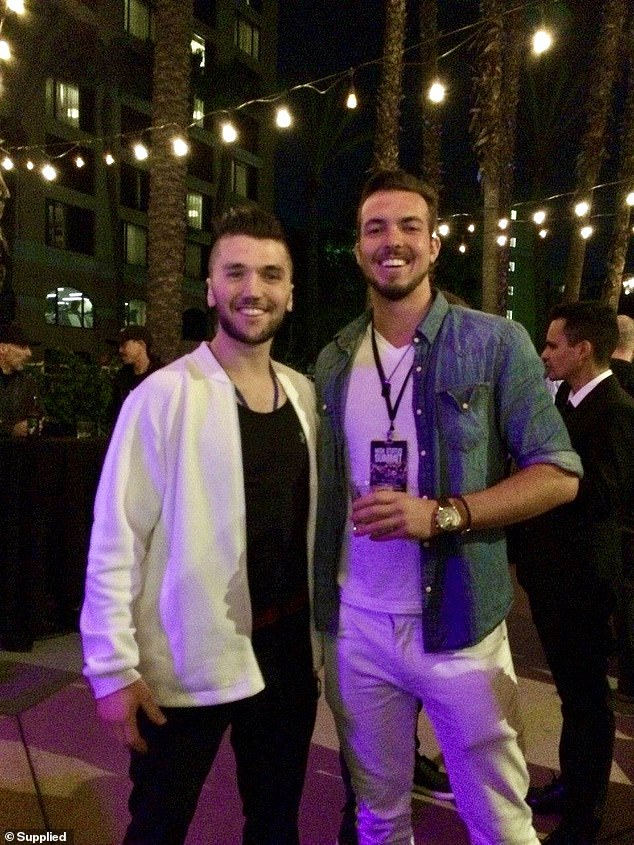 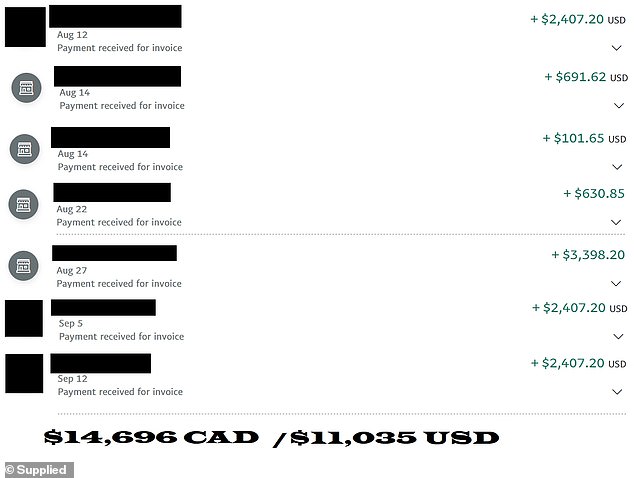 Mr Lapierre now earns more than $14,000 a month and is on track to pull in six figures this year

Mr Lapierre said the course taught him how to market himself efficiently to land high-paying clients.

Mr Ferres said there are five ways anyone can make money online with no digital marketing skills or experience.

The first is to make the most of email marketing by writing compelling subjects and copy that intrigues people into opening and reading your emails.

The second tip is to utilise social media, which boasts 3.8billion active users, to spread the word about your business and gain traction.

Mr Ferres said another way to make money online is through chat closing, where you send people direct messages via social media to sell products.

The fourth suggestion is to use phone closing, which entails calling people to discuss sales – a preferable choice for higher-cost services.

The last piece of advice is to partner up with another business or company and market their investments as your own in a process called White labelling. 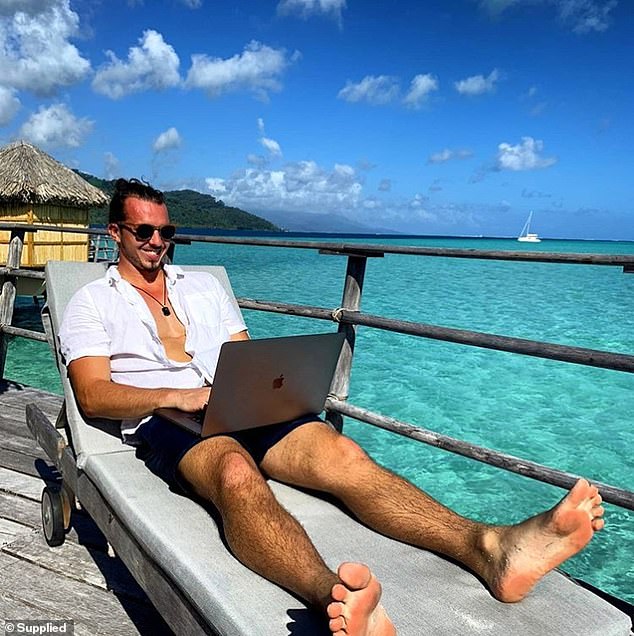 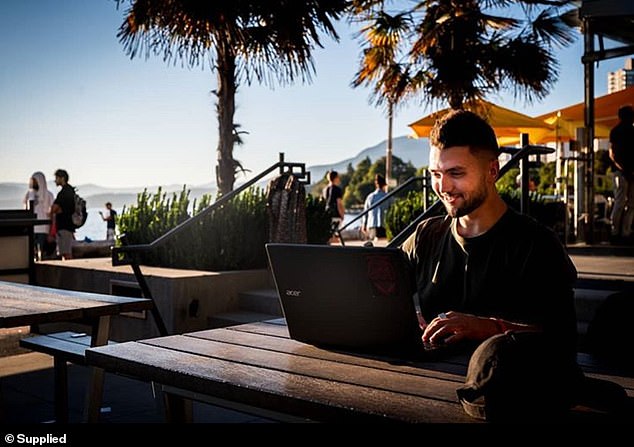 After being kicked out of his grandmother’s house, Mr Lapierre threw himself into building his business, reaching out to hundreds of people over social media from a small coffee shop. He is pictured earlier this year

Mr Lapierre is now based in Vancouver and is working on opening his own agency to help fitness coaches with their marketing.

His advice to others trying to find a career path they can earn a decent living from is to pick one skill set that businesses are willing to pay 1,000 to $10,000 a month for, go all-in with being the best you can be with that skill and offer it to those businesses.

‘No matter what you do, never give up on yourself, anyone can do it.’

Mr Ferres course teaches copywriters how to bring in business by easily identifying influencers and business owners who are looking for help, highlighting the most effective and under-utilised places to land clients in 2020.

He also explains what phrases to use when reaching out to prospects to virtually guarantee a reply.

Let’s be real, it’s 2020. If your business isn’t on social media, does it even exist? With 3.8 billion active users, it’s pretty clear that social media is where the attention is – most notably Facebook, Instagram and recently, Tik Tok. Millennials spend upwards of 3 hours a day on social media and messaging apps consuming content, often more time than they’re spending watching TV.

Most people still check their emails everyday, and if you know how to write compelling subject lines and email copy that intrigue people to open and read your emails, then you can nurture a strong relationship with your readers and make a lot of sales! Needless to say this is a skillset that savvy business owners are willing to pay a pretty penny for.

Let’s be real, it’s 2020. If your business isn’t on social media, does it even exist? With 3.8 billion active users, it’s pretty clear that social media is where the attention is – most notably Facebook, Instagram and recently, Tik Tok. Millennials spend upwards of 3 hours a day on social media and messaging apps consuming content, often more time than they’re spending watching TV.

If we think of the old school marketing acronym AIDA (attention, interest, desire, action), attention is the first step in the process. If you can’t get someone’s attention, then all the rest of your marketing efforts will be meaningless.

The big companies are finally starting to wake up to this fact and divert part of their multimillion dollar TV advertising budgets to social media because they’re getting a much higher return on investments (ROI) there. High level CEOs aren’t going to sit down and mess about with Instagram stories themselves and so are happy to pay good money to millennials to run their business social media accounts for them.

Chat closing is a relatively new concept, but it’s gaining popularity extremely quickly in the online space. People are starting to become numb to ads and sales funnels because they’ve seen thousands of them, and many people (especially younger people) don’t like getting on the phone for fear of being put in an uncomfortable high-pressure sales situation. Enter chat closing.

You can sell enormous amounts of products and services over Instagram and Facebook DMs, and people will happily buy from you because the whole process is friction free, and zero pressure. Business owners are more than happy to pay you a 10-20% cut of all sales you make so if you don’t mind spending a few hours a day in the DMs then 6 figures a year in commissions is certainly possible.

As near and dear chat closing is to my heart, sometimes you need to talk to a real person 1:1 for those expensive purchases. For price points of $3k or more, usually you want a bit of personalised reassurance that what you’re buying is the right fit for you. And if you can be that person on the phone, guiding people home towards the sale in a way that’s win win for everybody, then you can do very well in commissions.

Note that this has nothing to do with cold calling, hard selling or being a sleazy salesman. Proper phone closing is done with finesse and should feel invisible, like the prospect doesn’t even know they’re being sold until they’ve bought. The prospect walks away excited about their purchase, the business owner makes a sale, and you walk away with a fat commission.

If you have zero skills to offer the marketplace and no time to invest to learn any, then you can still make a killing by white labelling other people’s services as your own. You partner up with talented individuals who have strong digital marketing skill set and put all your focus into landing clients.You do the work once to find and close the client, your partner delivers the actual service, and you guys split the profits.

To be honest, I don’t know of a simpler way to make money online legally than starting a digital marketing agency and outsourcing your deliverables to people with the skillset.

Harvey Weinstein, 68, was paid a special visit by his actress girlfriend Alexandra Vino, 27

PIERS MORGAN: I was with Gareth Southgate three days before his positive test

Woman, 47, finds love in lockdown within an HOUR of signing up to a dating app - and they're engaged

How To Write Songs That Sell

Harvey Weinstein, 68, was paid a special visit by his actress girlfriend Alexandra Vino, 27

Nature at its most cruel: Baby baboon cries out in fear and pain as lioness toys...

This Day in History: Dec. 5