Phoebe Burgess will keep her husband Sam’s famous surname despite publicly accusing him of threatening her father and subjecting her to domestic abuse.

The 31-year-old social media influencer continues to call herself mrsphoebeburgess on Instagram, where her account is littered with old pictures of the long-separated couple.

Phoebe gave evidence against her estranged husband on Monday as he was defending charges of assaulting and intimidating her father Mitchell Hooke.

She supported her father’s claims that Burgess had threatened him during a visit to the Hooke family home in the New South Wales Southern Highlands shortly after their split. 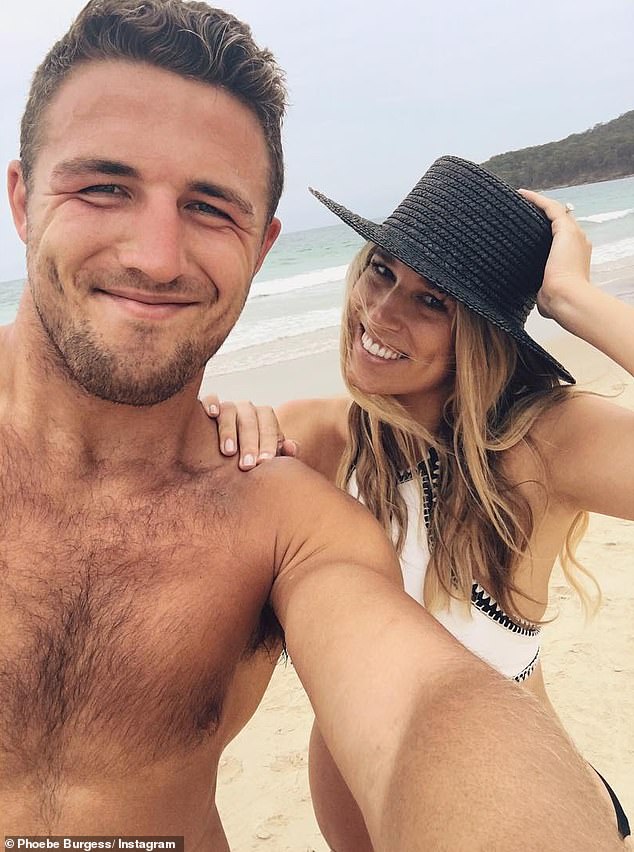 Phoebe Burgess will keep her husband Sam’s famous surname despite publicly accusing him of threatening her father and subjecting her to domestic abuse. This image still appears on Phoebe’s Instagram account

Phoebe, a 31-year-old social media influencer, continues to call herself mrsphoebeburgess on Instagram, where her account is littered with old loved-up pictures of her with Sam

She also admitted leaking a damning 50-page police statement she made about Burgess to a newspaper which published allegations against him of domestic violence and drug misuse.

At the start of her evidence Phoebe was asked to clarify the status of her relationship with 31-year-old Burgess. ‘I’m his ex-wife,’ she told Moss Vale Local Court.

Under cross-examination she was questioned about whether she was still Phoebe Burgess or had reverted to calling herself Phoebe Hooke.

‘As long as my children are Burgess I will always be Burgess,’ she said.

The Burgesses, who married in December 2015 and separated in October last year, have two children: Poppy, who turns four in January, and Billy who will be two next month. 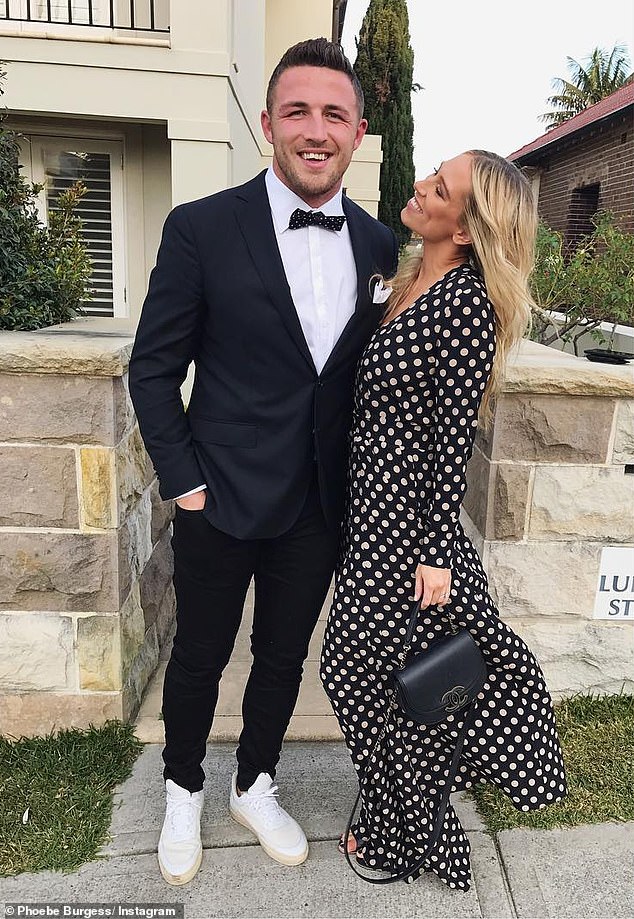 Phoebe has admitted leaking a damning 50-page police statement she made about Burgess to a newspaper which published allegations of domestic violence and drug abuse. This picture of the former couple is still on her Instagram account 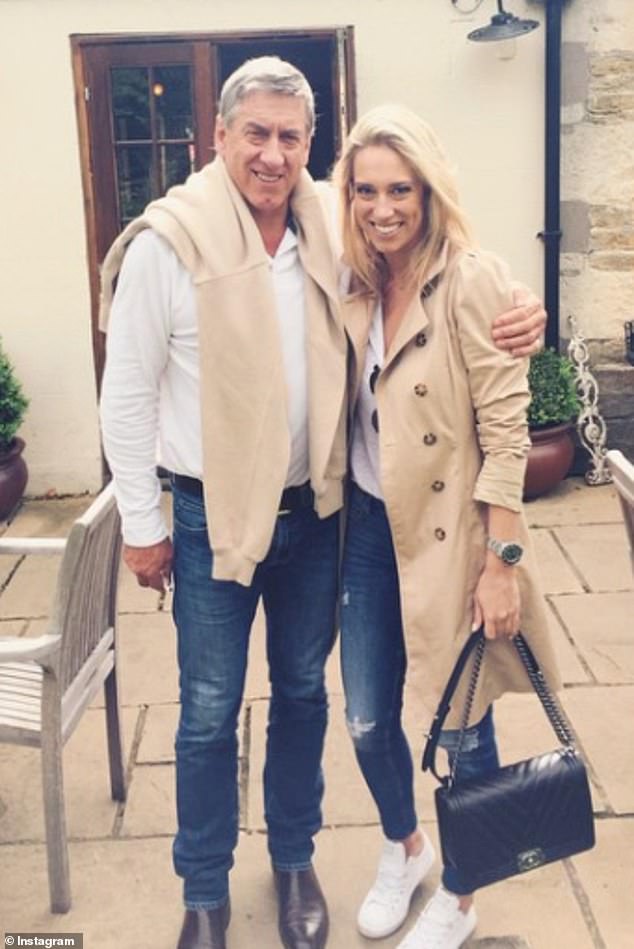 Mitchell Hooke, pictured with daughter Phoebe, claims Burgess stood over him in a menacing manner, called him a ‘piece of s***’ and said ‘I’m going to get you’ during a confrontation at the Hooke family home. He says he feared being hit by the footballer

Couples married in Australia must have been separated for 12 months before they can apply for divorce through the Federal Circuit Court.

A divorce document only legally ends a marriage. It does not of itself resolve how assets are divided or any issues involving children.

The Burgesses have already come to some arrangements over property, including selling their $5million home at Maroubra in Sydney’s south-east last December.

In April Phoebe also offloaded the F45 gym bought in the names of Sam Burgess and her older sister Jemima’s husband Gene Fairbanks in 2015.

The former journalist who now promotes herself as a brand ambassador has kept a $100,000 Range Rover which she is regularly seen driving around Bowral. 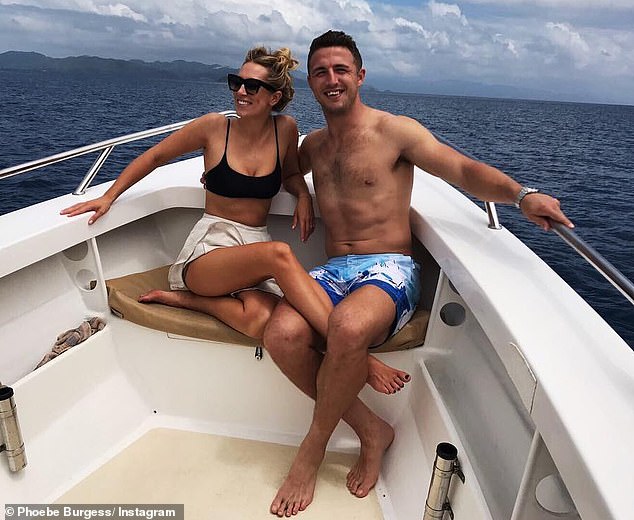 At the start of her evidence Phoebe was asked to clarify the status of her relationship with Sam Burgess. ‘I’m his ex-wife,’ she told Moss Vale Local Court. This picture is still on her Instagram account

Burgess has pleaded not guilty to intimidation and common assault arising from the incident at the Hooke home on October 19 last year.

Mr Hooke claims Burgess stood over him in a menacing manner, called him a ‘piece of s***’ and said ‘I’m going to get you’.  He says he feared being hit by the footballer.

After that confrontation both Mr Hooke and Phoebe spoke to lawyers – he also called a public relations expert – before making formal statements to police.

It was Phoebe who rang Triple Zero to report Burgess’s alleged threats against Mr Hooke.

‘It’s Sam Burgess, so it can’t be made public,’ she told the operator. ‘But I just need to report it ’cause he’s still in the area and he’s really angry.’ 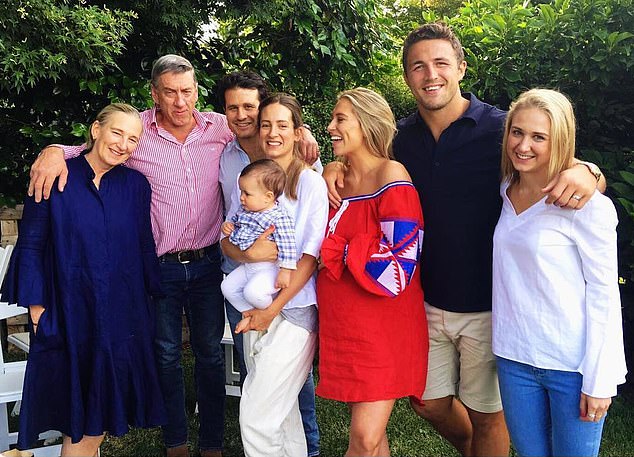 A broke family in happier times: left to right are Sarah Hooke, her husband Mitchell Hooke, their son-in-law Gene Fairbanks and his wife Jemima, Phoebe and Sam Burgess and youngest Hooke daughter Harriet

Phoebe became emotional in the witness box when she recalled making that call to report the father of her children to police.

‘I thought it was the ultimate betrayal,’ she said, close to tears.

In another part of the Triple Zero call Phoebe had said: ‘I just know he’s angry and I know he’s alone and he’s just acting like a f***ing idiot.’

Three days before the incident Burgess had gone to the Hooke home to discuss aspects of the breakdown of his marriage with his father-in-law.

Mr Hooke saw Burgess walking down his driveway and whistled at him to attract his attention. The pair then sat down to talk in a machinery shed.

‘It was calm, it was considered,’ Mr Hook told the court. ‘It was awkward. Sam was very emotional. 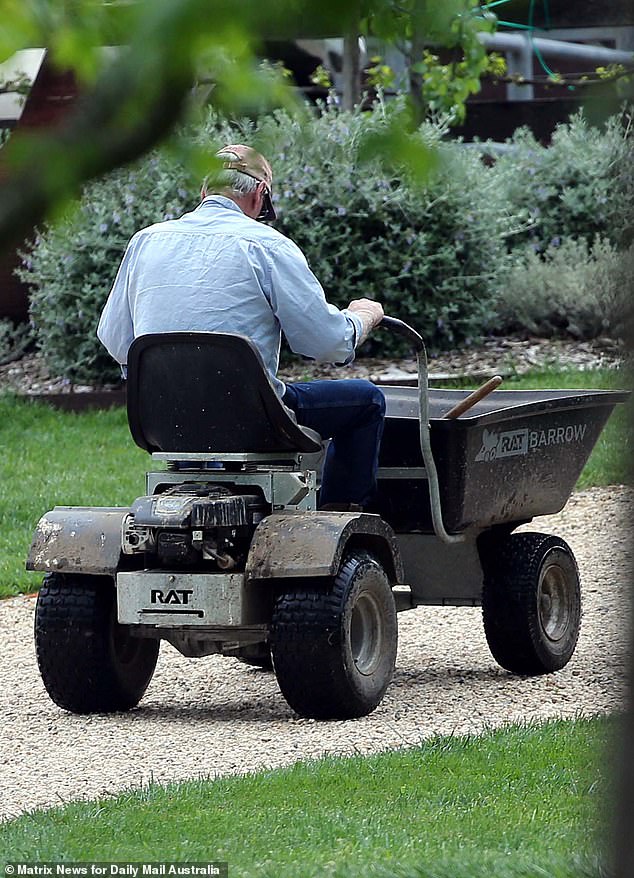 Burgess went to the Hooke home on October 16, three days before he allegedly threatened his father-in-law, to discuss aspects of the breakdown of his marriage. Mr Hooke (pictured) saw Burgess walking down his driveway and whistled at him to attract his attention

‘He opened up by saying he was unhappy. The reason the marriage had failed was because it was unhappy.’

‘I said, “Sam, you’ve got to learn to love yourself before you can love others. If you love somebody you’ll die for them”.’

Burgess has denied unrelated allegations of a drug-fuelled episode in the marital home in November 2018 when Phoebe was pregnant with Billy.

Those untested accusations were published in The Australian newspaper on October 2 and 4 this year with the assistance of Phoebe and Mr Hooke.

Lawyer Mark O’Brien, acting for Burgess, said last month: ‘The allegations are false and constitute an indefensible defamation against my client.’

‘It is apparent sources of the false allegations are those currently in dispute with my client over various issues.’

Phoebe has since admitted she gave The Australian a statement which formed the basis for the articles and her father said he spoke to a reporter.

One of the authors of the articles, journalist Sharri Markson, had been Phoebe’s editor at a magazine and he had agreed to her request to interview him.

Mr Hooke, onetime CEO of the Minerals Council of Australia, had also had previous professional dealings with Markson.

The 64-year-old was interviewed by Markson upon his retirement in 2013 and once offered her advice before she appeared as part of a panel on a television program.

Both he and Phoebe have denied they co-operated with the newspaper as part of a campaign of ‘orchestrated propaganda’ intended to destroy Burgess’s reputation.

Burgess has not spoken publicly about the criminal charges or the accusations in The Australian.

In March, Phoebe told Stellar magazine she was adjusting to life as a single mother of two toddlers.

‘I had an idea about how I wanted them to grow up and that’s not going to happen now,’ she said.

‘I’m just trying to keep up with them at the moment and make sure they’re surrounded by love, regardless of how that family looks.’

Businessman ‘with female accomplice incapacitated his wife with chilli powder’

Businessman ‘with female accomplice incapacitated his wife with chilli powder’

CDC says Americans should avoid travel during winter holiday season, get COVID-19 tests if they do

For those who do travel, the CDC is now recommending travelers get tested for COVID-19 before...