Jessica Alba remembers the second her daughter realized she was well-known: ‘She was mortified’


Kailas Wild thought his bushfire relief work was wrapping up as he sat in the last NSW SES debrief meeting in Sydney.

But minutes into the January 29 sitting, he received a message from a wildlife carer friend on Kangaroo Island calling on him to drive the 1,500km to help save koalas.

‘I had seen what had happened down there and it had crossed my mind whether I  could be of any assistance,’ Mr Wild, 34, told Daily Mail Australia.

‘I thought maybe I could help get one koala down or two and that would be worth the trip.’

The next day the arborist packed his car with clothes, climbing gear and a chainsaw then made the 20-hour drive from NSW to South Australia to ferry across to the fire-ravaged islet. 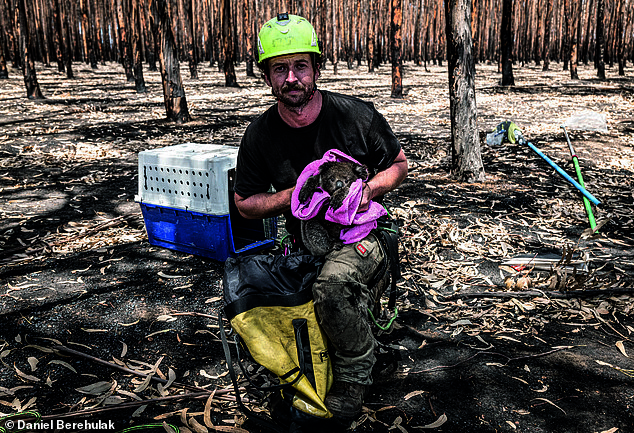 Lightening strikes had sent fires blazing across the fauna-abundant island in December 2019, rapidly spreading throughout its numerous nature reserves into the new year.

When Mr Wild arrived on January 31, he was glad his work with the SES had prepared him for the smell of dead wildlife.

‘You couldn’t tell it had been devastated by fire until 15 minutes into the drive. Then, driving down the highway, either side of me was blackened,’ he said.

‘When I got out of the car I was hit by the smell of the dead animals. It was a sensory overload. There were koalas that you couldn’t even recognise anymore.’

Over the course of the next seven weeks, Mr Wild would climb trees to rescue more than 100 injured and starving koalas whose home had been gutted by fire.

As he drove towards the centre of the island, Mr Wild passed an emergency service command on standby bracing for further fires amid the 42 degree heat as thick grey smoke filled the air.

He continued to make his way to the Koala wildlife park at Parndana, where an emergency animal hospital had been erected since the fires first broke out.

‘The hospital was overflowing with koalas, with 30 joey alone in the lounge room,’ he said. 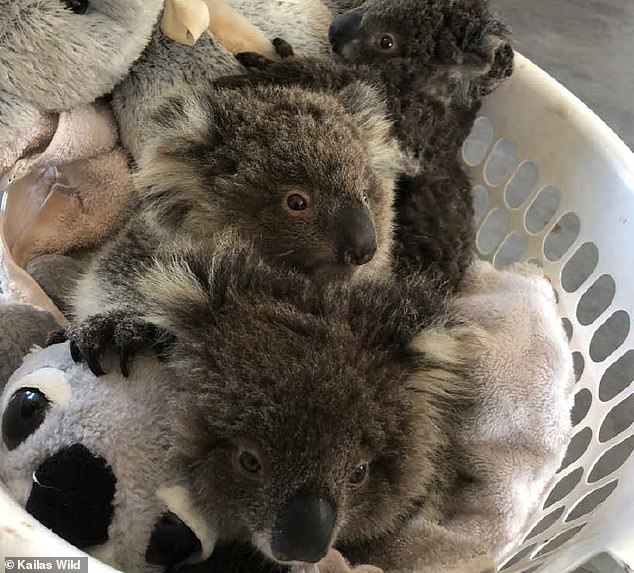 Over seven weeks, Mr Wild rescued more than 100 injured koalas and took them to the wildlife park for treatment (some pictured) 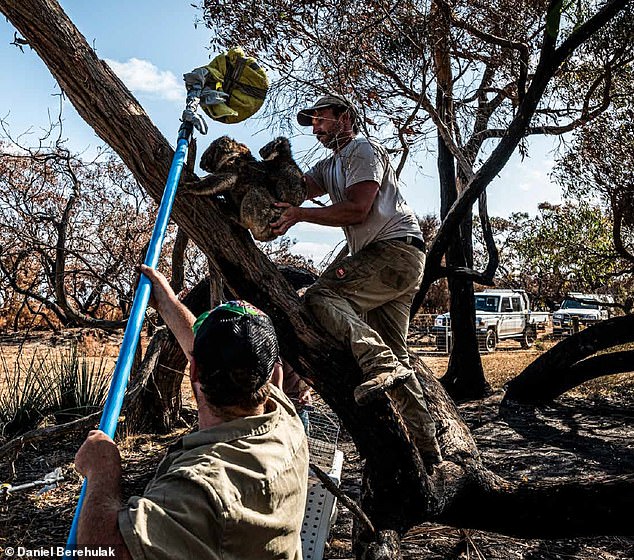 ‘They had about 600 in total come through. To cope, the wildlife park owners had to have ADF volunteers and staff from Zoos in VIC, SA, Aus Zoo, and from the RSPCA come down to help.

‘Everyone was being utilised to coordinate the logistics of the koalas. It was extreme.’

There, Mr Wild was equipped with poles to help lure the mammals out of trees and bags to place them into to bring them back to the facility.

Venturing out on his own while about 15 others manned the hospital, he methodically drove across the island’s tree plantations looking for patches of unharmed trees koalas had flocked to in a desperate bid to survive.

‘That is when I first saw the absolute, complete destruction of these environments. There were just rows, and rows of dead koalas as far as you could see,’ he said.

‘There were burnt, lying along the ground. No fur or anything. They look like they had been mummified.’ 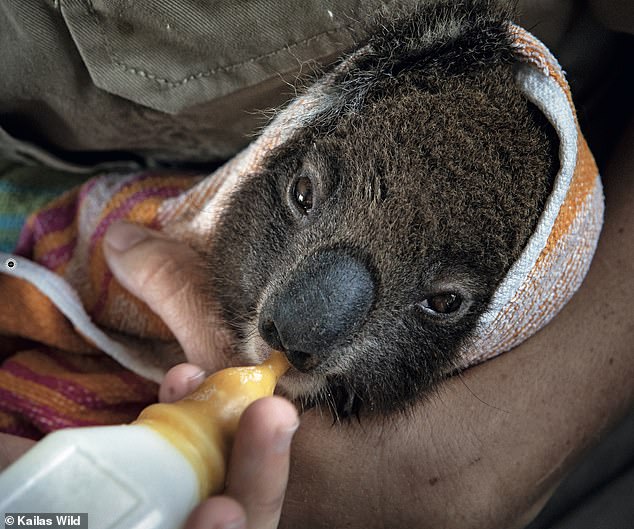 The wildlife park was inundated with koalas (one pictured), with around 600 going through the centre in the aftermath of the bushfires 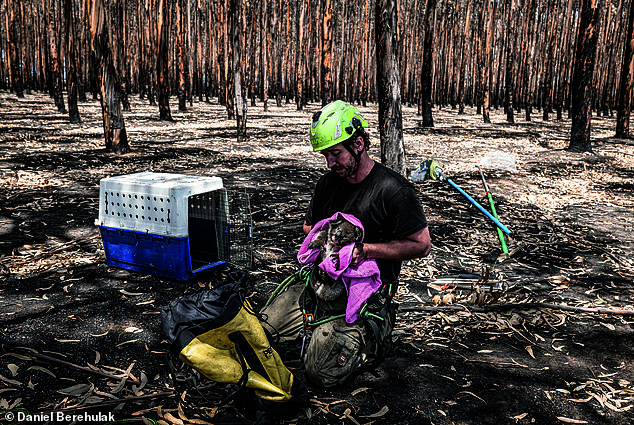 To the much-needed reprieve of firefighters and emergency teams, torrential rain battered down across the island the following day, dousing out active blazes.

In the midst of an under-resourced, bustling, emergency zone, Mr Wild quickly established his own daily routine.

He would wake, eat, get petrol, then check in at the wildlife park to help the others cut leaves to feed the koalas already in care, before going out to look for more burnt marsupials until sundown.

After giving up on finding life among the charcoaled trees, Mr Wild began scouring less tarnished areas and collecting as many koalas as he could fit inside his ute.

When a koala was spotted, he would climb up an adjacent tree then wave the pole above the furry creature to urge it to move down.

Once the koala was lower, he would then swing across to the tree it was in using his ropes, then climb down to gradually coax it down to the ground.

Other times he would be able to reach the Australian icons by just climbing up the tree they were in, sometimes calling in for back up from the wildlife park if needed.

Despite having previous experience as a wildlife carer, capturing the wild native bears proved difficult. 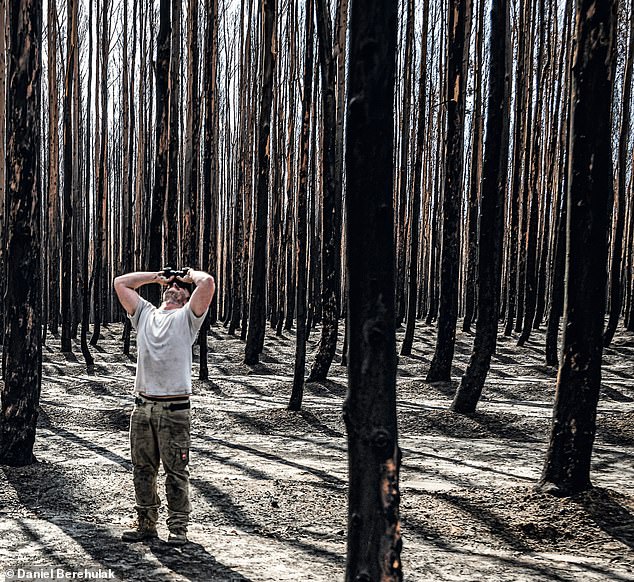 ‘The koalas down south get a lot bigger than up north, weighing five kilos heavier on average. Their claws are so sharp and they are so strong,’ he said.

‘We are so used to seeing koalas that are used to humans, in zoos or sanctuaries, but these ones were angry and did not like being handled.’

‘I quickly learnt that the way people down there were handling them was to grab them by the scruff of the neck, instead of their forearms, so you don’t  have to struggle.’

While working with animals may seem like a dream job to many, the tragic  circumstances left Mr Wild with emotional scars.

‘It was heartbreaking. There was one burnt orphan joey that I found, the state I was in when I found it, and that image of the situation, it just really destroys you,’ he said.

But amid the devastation there were miracles and special bonds, with Mr Wild admitting one baby Koala, later named Joey Kai in his memory, soon became his favourite.

‘When I saw her I immediately assumed she would need to be euthanized,’  he said.

‘I encouraged her back down towards me and stuffed her into a bag and took her back to the hospital. It was extremely upsetting. 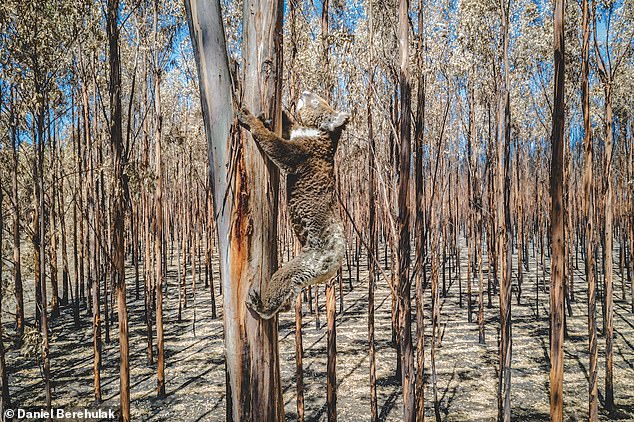 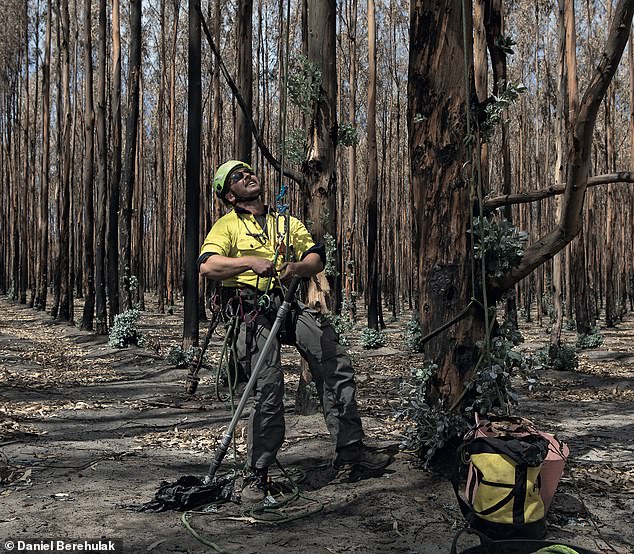 ‘The vet checked her over. She had a tick and burns on her face. And they thought she was going to be alright. When they gave me that news, it was incredible.’

‘My hope got pinned on her a lot. I had to be mindful not to humanise or imprint on her too much for her own good. But I would go in and spoil her with extra leaves.’

After koalas were treated, they were moved into a pre-release area near the wildlife park.

At the suggestion of a friend, Mr Wild started a GoFundMe to help finance his work, which he would journal in each night to keep all of his supporters updated.

A few weeks in, he realised it was not a sustainable to keep doing it on his own and hired a friend to travel down to help him.

The pair continued their work until the pandemic took hold of the nation in March, forcing them to head home before the state borders closed.

‘Fortunately at that time, it started to coincide with trees recovering and getting green growth. Less koalas were needing to be rescued,’  he said. 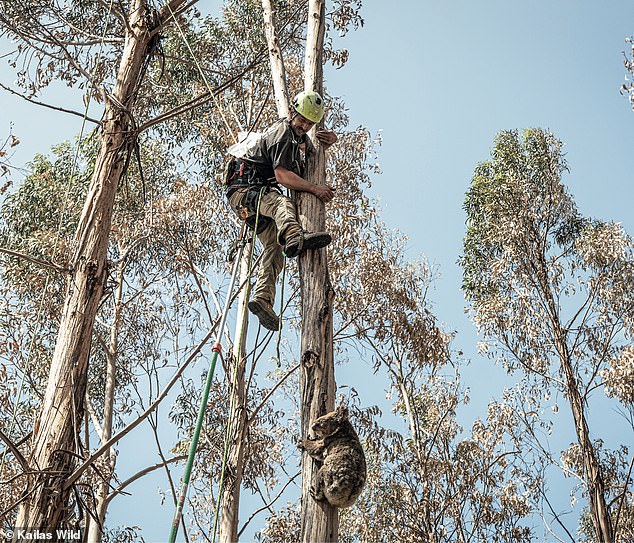 Mr Wild would climb an adjacent tree then swing across to the one with the koala, then gradually move down it to coax the Koala to the ground 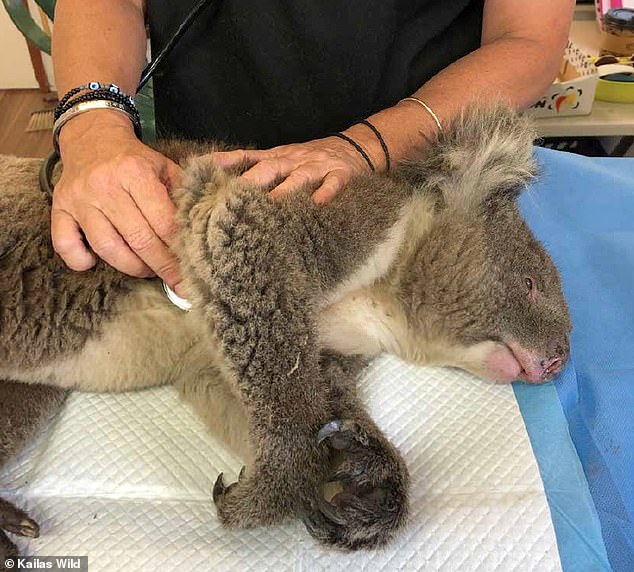 ‘At that stage, we were no longer needed.’

While Mr Wild wanted to be in the state for Joey Kai’s release, he was able to experience the moment through a video sent to him by the wildlife park’s owners.

Since returning to NSW, Mr Wild has written a book about his experience and is continuing the fight to save koalas, with the creatures predicted to be extinct within the state by 2050.

‘Last summer overwhelmed everybody’s capacity. Nobody was prepared for what we experienced,’ he said.

‘Climate change is no longer this abstract thing from the future. This is not even the new normal, it can get worse than this.’

‘We need to act now and protect these animals before its too late.’

The 99th Koala by Kailas Wild is published by Simon & Schuster Australia and is available in bookstores from November 1. 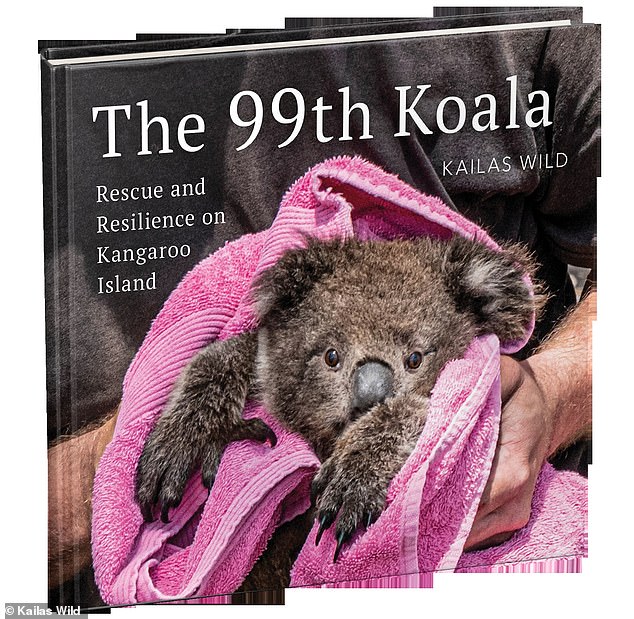 Sweet’N Low magnate, 89, leaps to his death from luxury Upper East Side apartment