US reports single-day record of 88,500 cases with states like Illinois reporting all-time highs

US reports single-day record of 88,500 cases with states like Illinois reporting all-time highs

On Thursday, the US set a record-high number of coronavirus cases with more than 88,500 new infections reported in a single day.

This breaks the previous record set on Saturday of 83,757 and brings the total number of cases to 8.9 million.

Several states also reported their own single-day high number of cases with nearly 6,400 new cases recorded in Illinois, more than 2,000 in Colorado and more than 1,000 in North Dakota.

The seven-day rolling average number of new daily cases also hit a high of 76,541 according to a DailyMail.com analysis of data from Johns Hopkins University.

However, while daily deaths are low compared to figures seen in the early days of the pandemic, they are creeping back upward with 971 fatalities reported on Thursday and 994 reported on Wednesday.

On average, about 800 people are dying per day, according to the DailyMail.com analysis.

Death rates have dropped for the most severely ill patients – from more than 25 percent to less than 10 percent, according to one New York City hospital – but experts say the recent surge in infections could undo the progress. 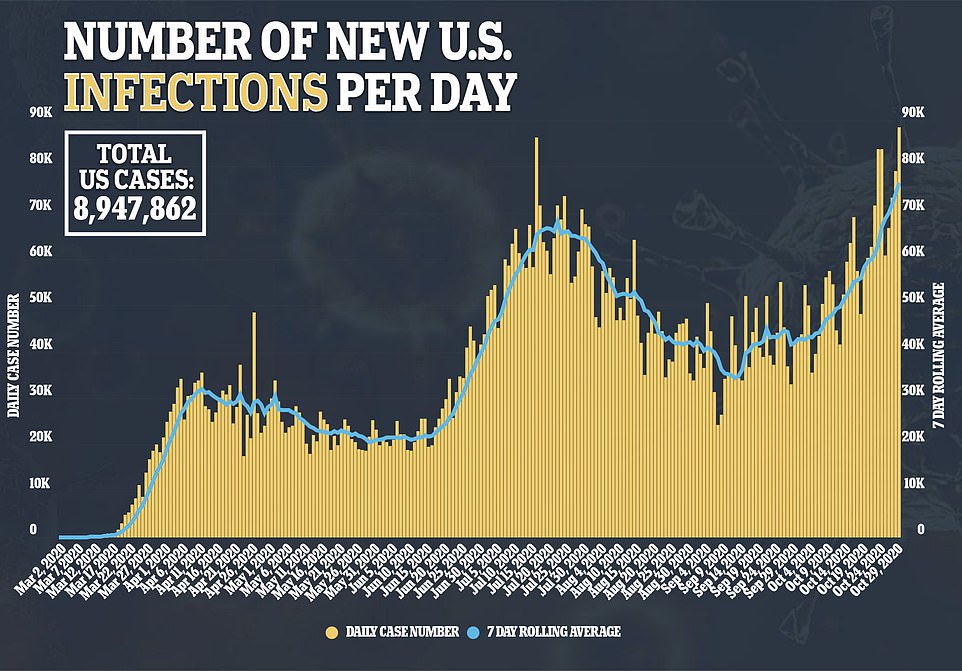 The US set a record-high with more than 88,500 new coronavirus cases on Thursday, breaking the previous single-day record of around 83,700 on Saturday

The seven-day rolling average number of new daily cases also hit a new high of 76,541 (second from right), according to data from Johns Hopkins University as hospitalizations and deaths tweak upward

In Illinois, health officials reported a single-day high of 6,363 new COVID-19 cases on Thursday and cases are up 151% since October 1

Cases have been surging across the country, with the Midwest and Mountain West in particular seeming to shatter new records every day.

Statewide metrics since October 1 are staggering with cases up 151 percent, deaths up 82 percent and hospitalizations up 73 percent, reported WLS-TV.

‘We have a real problem on our hands and people’s lives hang in the balance,’ Gov. JB Pritzker said during a press conference yesterday.

In nearby Wisconsin, things aren’t much better.

On Thursday, the Wisconsin Department of Health Services reported 4,870 new infections – nearly a 37 percent positive test rate – and second only to the record-high of 5,262 recorded on Tuesday,

According to WBAY, the state has added almost 15,000 coronavirus cases to the total count in the last four days.

Health officials say the seven-day rolling average is 4,128 new cases a day and the seven-day average positivity rate is 29.11 percent, both figures of which are all-time highs.

Wisconsin was the subject of a recent Centers for Disease Control and Prevention report that tracked the spread of COVID-19 at a summer camp in the southeastern part of the state.

Between July 2 and August 11, one camper, who tested negative before arrival, contracted the virus and then spread it to nearly 80 percent of the camp’s attendees.

‘COVID-19 spreads like wildfire when you bring a lot of people together in a relatively small space,’ Julie Willems Van Dijk, told the Milwaukee Journal Sentinel.

South Dakota has the second-worst rate in the nations with 95 cases per 100,000 people and a positive test rate of 40%

‘If there was one person who was ill with COVID-19, they easily spread that to everyone in their housing unit and then the nature of summer camp where you eat meals together, go swimming together, do activities together, sing around the campfire together – all of those activities are great spreading events. 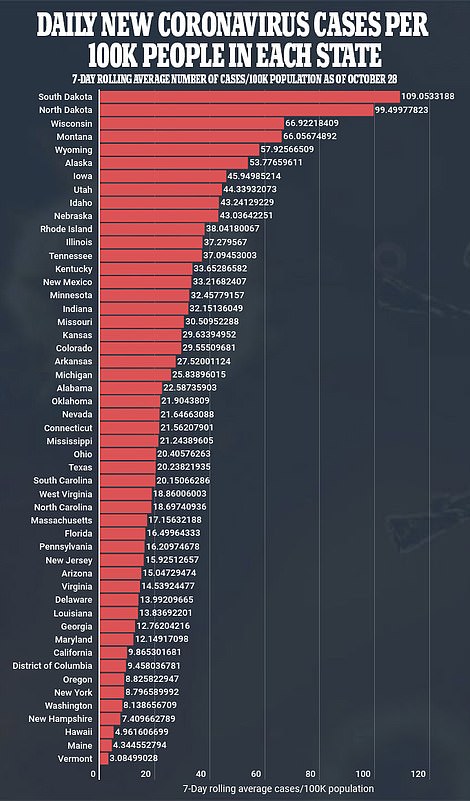 Among the Great Plains, two states, North Dakota and South Dakota, were largely spared from the virus until recently, and currently have two of the country’s worst outbreaks

In North Dakota, health officials reported a record of 1,222 new cases on Thursday after three straight days of declines and shattering the previous high of 1,038 on October 22.

‘This is what may appear to be the beginning of the fall surge’ that experts such as Dr Anthony Fauci, the nation’s top infectious disease expert, has warned about for months, said Gov Doug Burgum during a briefing on Thursday.

With holidays like Thanksgiving and Christmas coming up, he added: ‘This is going to be a real challenging time.’

Active cases of COVID-19 soared in North Dakota to a new high on Thursday after three straight days of declines, and coronavirus-related hospitalizations and newly confirmed cases also set records.

Gov. Doug Burgum during a public coronavirus briefing Thursday said ‘this is what may appear to be the beginning of the fall surge’ that health experts have warned about in the U.S. for months. With holidays and hunting in coming months, ‘This is going to be a real challenging time,’ the governor said.

What’s more, the state reported 1,000 cases on Thursday, which a positive test rate of 40 percent.

Trump’s explanation of more testing doesn’t explain the surge. Vox reports that the testing average in South Dakota increased by 11 percent but cases soared by 20 percent

Dr Bonny Specker, an epidemiologist at South Dakota State University, told the site that the reason for the rise in the Dakota was due to a lack of public health measures.

‘Federal and many state leaders have not implemented mandates or reinforced [public health agencies] recommendations to prevent the spread of the virus,’ she said.

‘In South Dakota, the governor had the information needed to minimize the impact of this virus on the health of South Dakotans, but she ignored that information as well as national recommendations from the CDC.’

In the Mountain West, the least populous state in the union – Wyoming – now ranks among the worst states for COVID-19 infection rate.

Wyoming has seen 2,298 new confirmed and probable cases of the virus in the past week, according to data from Johns Hopkins University.

This means the positive test rate is now at 55.21 percent. It’s a huge jump from the roughly 500 people testing positive in Wyoming in July.

She said the surge is due to lack of face masks indoors and the need of people under 35 to get tested regularly regardless of whether or not they display symptoms.

‘Wear your mask, physically distance, but really pay attention to what you’re doing in the household, in both public and private spaces, to not gather in that way that we know is spreading the virus,’ Birx said. 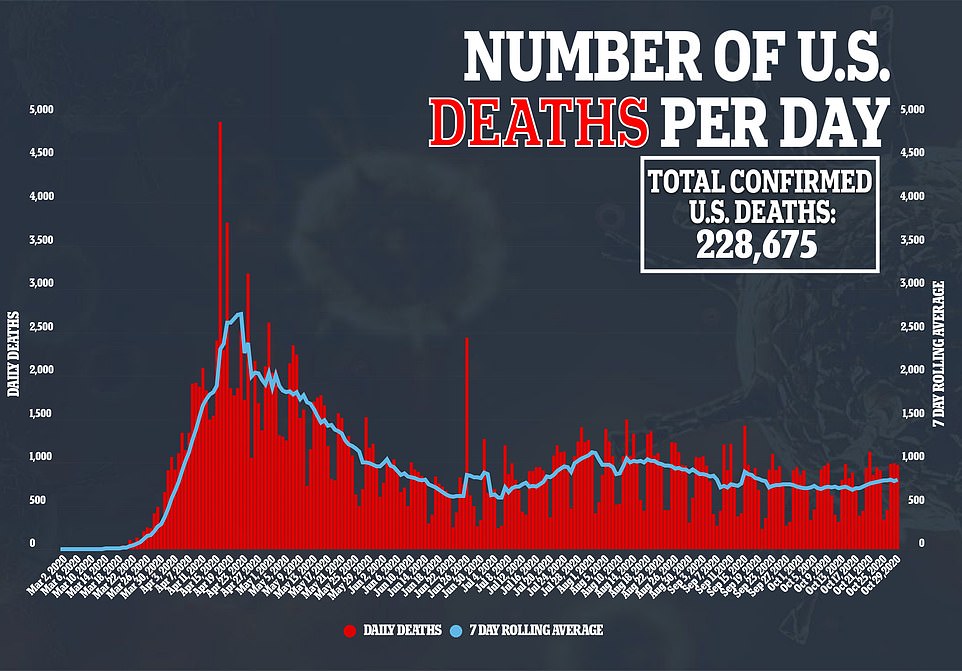 Daily deaths are low compared to figures seen in the early days of the pandemic, with 971 recorded on Thursday, but are creeping back up towards 1,000 per day 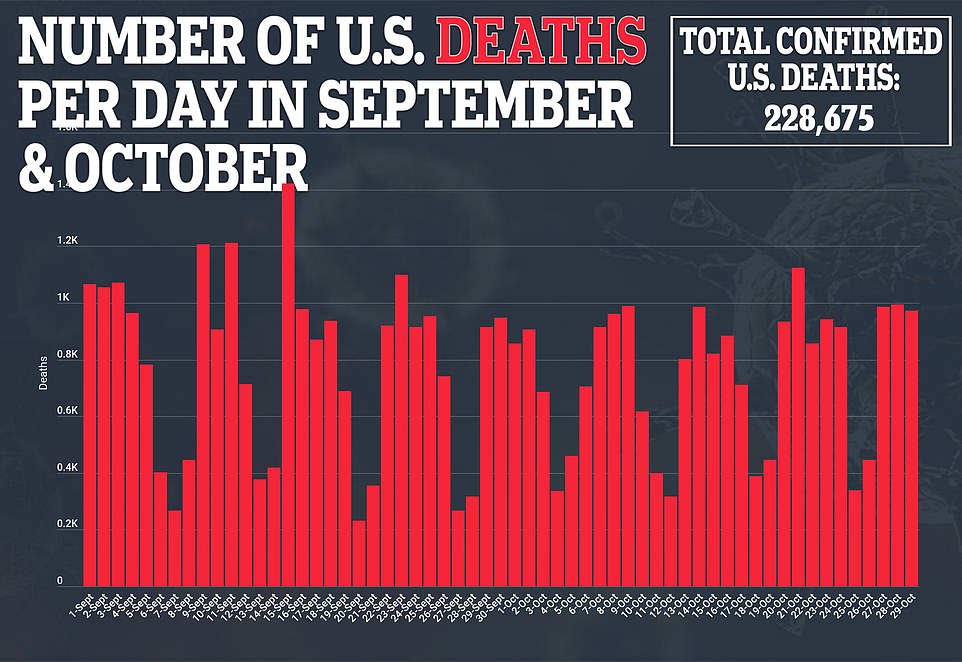 However, across the US. researchers have found that the death rate among the most seriously ill patients seems to be improving.

A new study from NYU Langone Health looked at the outcomes of more than 5,000 COVID-19 patients hospitalized among the system’s three hospitals between March and August.

Experts say the reason for the drop in death rate is likely due to a combination of factors including better understanding of how to treat the disease, better awareness among the general public and people being treated before their cases become serious.

‘We don’t have a magic bullet cure, but we have a lot, a lot of little things, that add up,’ senior author Dr Leora Horwitz, director of NYU Langone’s Center for Healthcare Innovation & Delivery Science, told The New York Times.

We understand better when people need to be on ventilators and when they don’t, and what complications to watch for, like blood clots and kidney failure.

‘We understand how to watch for oxygen levels even before patients are in the hospital, so we can bring them in earlier. And of course, we understand that steroids are helpful, and possibly some other medications.’

However, with cases and hospitalizations on the rise, there is fear that deaths will not be far behind.

‘If hospitals that aren’t prepared for large numbers of people have to deal with a large influx of Covid patients, or small hospitals get pulled into it, we should expect that mortality could change unfortunately. That’s a warning,’ Tom Inglesby, director of the Center for Health Security at Johns Hopkins University, told The Times.

Medical experts are worrying that the surges in cases around the country could reverse or roll back those gains.